We offer a wide variety of tours by car / van, bicycle, or on foot. We also offer private tours with customized itineraries, so you can choose which attractions/places you would like to go to. 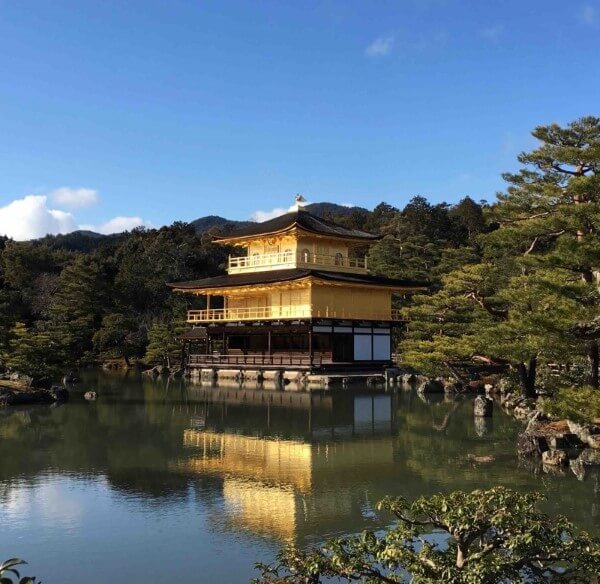 A Kyoto tour in northern Kyoto would typically include Sakyo-ku, Kita-ku, and Ukyo-ku. This area contains a large number of important religious complexes, some of them listed as UNESCO World Heritage Sites. The most famous Kyoto tour attractions in this area are selected are Kinkakuji Temple, Ginkakuji Temple, and Ryoanji Temple.

However, tourist attractions for a Northern Kyoto tour are somewhat scattered and distant from each other so visitors with enough time on their hands will be rewarded by also exploring Daitokuji Temple and Enryakuji Temple (on Mount Hiei), two of Japan's most impressive temple complexes, and the Shugaku-in Imperial Villa, which impresses with one of the greatest masterpieces of Japanese gardening.

Shimogamo and Kamigamo Shrines host the Aoi Matsuri on the 15th of May, one of the big three in Kyoto's top festivals. Other places of note for a northern Kyoto tour are Kozanji Temple, a quiet, modest hillside retreat, famous for its tea garden, the oldest in Japan. Japan's first manga was drawn here in the 12th century, namely the Choju-giga scrolls. 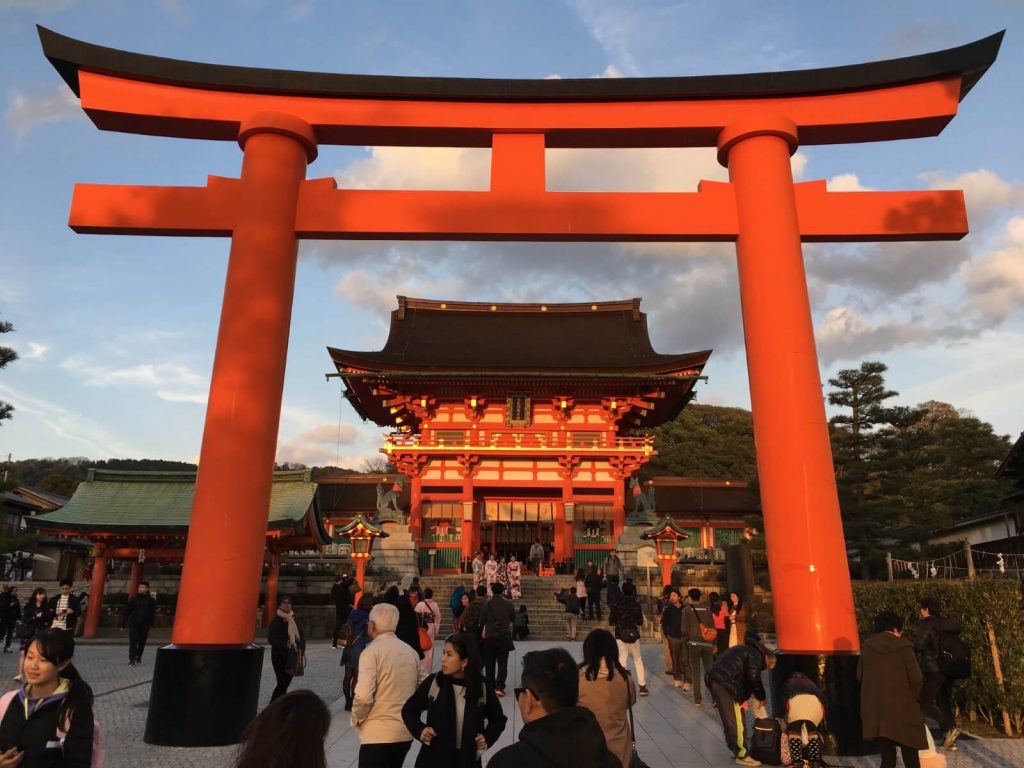 For a Kyoto tour in the south we look down to the wards of Fushimi, Minami, Yamashina, and Shimogyo-ku. Southern Kyoto attractions always include Fushimi Inari Shrine, made famous in the film "Memoirs of a Geisha". Dedicated to Inari, the Shinto god of cereals, Fushimi Inari Shrine is the head shrine (taisha) for 40,000 Inari shrines across Japan. Stretching 230 meters up the hill behind it are hundreds of bright red torii (gates). A visitor could easily spend several hours walking up the hillside, taking in the beautiful views of the city of Kyoto and walking through the torii, which appear luminescent in the late afternoon sun. Countless stone foxes, also referred to as Inari, are also dotted along the path.

Further south, and to the east brings us to the city of Uji, just outside the Kyoto city limits. Uji is well known for the famous Tales of Genji, as well as Byodoin Temple, which is illustrated on Japan’s 10 yen coin. Byodoin is a striking example of Buddhist Pure Land (Jodo) architecture. Together with its garden, the temple represents the Pure Land Paradise and was quite influential on later temple constructions. Byodoin was originally built in 998 as a countryside retreat for the powerful politician Fujiwara no Michinaga, not as a temple.

Michinaga's son turned Byodoin into a temple and commandeered the construction of its most spectacular feature, the Phoenix Hall. Although the building was given another official name, almost immediately after its construction in 1053, its nickname was coined Hoodo ("Phoenix Hall") because of its shape and the two phoenix statues on its roof. As mentioned, this hall is now featured on the back of the Japanese ten yen coin. 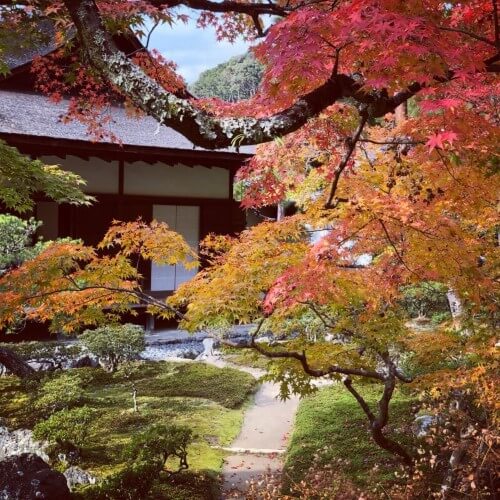 Kyoto is a city made for tourists, especially for those who love history, religions of the world and, of course, Japanese culture. Many a Kyoto tour takes place in the eastern part of the city, which is divided into wards. Higashiyama Ward features several famous temples of Kyoto, as well as the popular Gion geisha district. One magnificent place to visit on a Kyoto tour is Chion-in Temple, which is built upon one of the most important sacred sites in Japan. Chion-in Temple is the main temple of the Jodo-Shu, or Pure Land sect of Buddhism.

Chion-in Temple was built in 1234 by a Buddhist monk named Genchi. He was a disciple of the founder of the Pure Land sect, Honen. It was built on the location where Honen preached his philosophy to the common people and where he fasted until his death in 1212. The Jodo-Shu teachings became the most widely accepted Buddhist teachings in Japan. Most of the original buildings were destroyed by fires and the present complex was built in the 17th century. A small shrine within the complex called the Mei-Do houses a statue of Honen. The statue is designated as one of the National Treasures of Japan.

The large main hall of Chion-in Temple can hold up to 3000 people. The corridor behind the main hall that leads to an Assembly Hall has a nightingale wooden floor that makes a squeaking noise when walked on, alerting its inhabitants of intruders. The 74 ton temple bell of the Chion-in Temple is the heaviest in Japan. At midnight on New Years Eve, it is struck 108 times, signifying the purging of mankind’s 108 sins. The Hollywood blockbuster movie, The Last Samurai, was partly filmed at the Chion-in Temple. 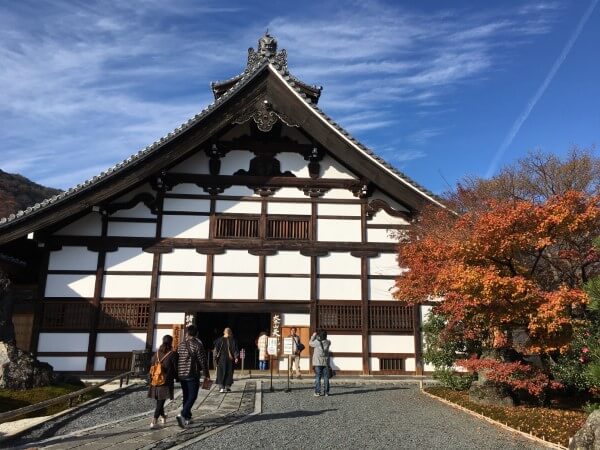 The main place for a Kyoto tour in western Kyoto takes us to the ward of Ukyo, the splendid Arashiyama area. It is a picture-postcard perfect destination surrounded by green and gold covered mountains on all sides. Wander through the leafy suburbs to enjoy the beautiful sights of cherry blossoms, visit temples, shrines, traditional restaurants, and tea-houses. Get centered and find some tranquility at Tenry-ji Temple, one of Kyoto's five great Zen temples.

Go for a leisurely stroll among the pine and maple trees of its garden, Tenryu-ji Garden. Lounge by the beautiful lake and enjoy moments of serene contemplation. Additionally, one of the area's most famous landmarks is the Togetsyko Bridge which straddles the Oi River. The first crossing at this site was erected in the eighth century during the Heian Period. The structure existing today is the result of reconstructions in the 1930s.

Looking down to the surface of the water one can see a wonderful reflection of the area. Adjacent to the bridge is a splendid riverside park with an abundance of cherry trees. This area by the river is renowned for its breathtaking views of nature and the Arashiyama district's wonderful architecture.

Any 4 or 8 hour tour by walking or automobile of northern, southern, eastern, or western Kyoto is customizable to your specifications. We can stay in one area, or visit multiple areas, based on your preferences and schedule. To reserve a tour customized by us or you, contact us by email at: info@toursinkyoto.net or by visting our contact page. Combination car, walk, bike tours also available.